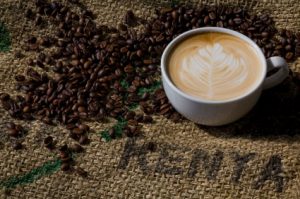 Margaret Nyamumbo, Kenyan citizen and Harvard Business school graduate has developed a unique blockchain solution which aims to share “distinctive Kenyan coffee and to build a better supply chain that allows farmers to earn a sustainable income.” She implements this by removing middlemen involved in Kenyan coffee production and distribution chain and working directly with the farmers.

Historically, coffee was said to be planted in 1893 for the first time in Kenya. Kahawa 1893, Nyamumbo’s blockchain solution,  derives its name from that event. The company has introduced the use of the blockchain consumer delivery system which is the first fully traceable coffee delivery system in Kenya. This blockchain innovation also allows coffee consumers to tip the farmers directly by scanning a QR code and paying directly into the electronic wallets belonging to the farmers. Mpesa, Kenya’s local internet money transfer system can allow the farmers to get the funds instantly.

“If you pay 5 cents tip for each cup of coffee, it doubles the farmer’s income. Through traditional Fair Trade, for each $1 premium you pay, only 5 cents reaches the farmer with the rest lost to the supply chain, ”

“women who performed over 90% of the labor, owned only 1% of the land and went mostly uncompensated.”

While this endeavour may help reduce imbalances in the supply chain, it doesn’t particularly help women who, Margaret claims, do more than 90% of the work involved in coffee production in the country. That is why Kahawa 1893 commits about 25% of their income to provide access to credit for women in coffee production so that “they can participate in trade and empower themselves financially.”